US-China Review of Books Without Borders

In the summer 2019 issue of US-China Review, Jane Lael wrote this review:

In the Chinese school system, students are silent. They read, they listen to the teacher, they memorize information, and they take tests. It was a total surprise to them when their new American teacher, Martha Franks, requested that they read Homer’s Iliad, respond with their own ideas, and then share those ideas out loud in class. This was alien to them, difficult, and challenging. They felt and expressed their consternation and irritation—and that’s where it all began. Author/lawyer Martha Franks, in her brilliantly written book, details day-by-day, month-by-month, the process of teaching the students to think for themselves, to speak up, to share, and to get comfortable with it all.

Ms. Franks was in China because of questions, hopes, and fears swirling around the subject of how to educate young Chinese students in the light of China’s growing openness to the world. In her Chronicle of Higher Education article “Bucking Cultural Norms, Asia Tries Liberal Arts” (Feb 2012), Karin Fischer states: “The global economy is placing new demands on international hubs like Hong Kong and Singapore and opening up China’s once-closed markets to overseas investment. Not only do new hires in these places have to collaborate with counterparts around the globe, they’re also competing for jobs. And they’re not faring well, dinged for inflexible thinking, inability to work in teams, and lack of creativity. Casting their eyes West, reformers have latched onto American-style liberal, or general, education as a way to foster more nimble and adaptable thinkers.”

While the Chinese test-taking approach to education has produced a certain level of competence, some of China’s leaders quietly acknowledge there is little creativity, and wonder if the liberal arts are the answer. Thus, a number of experimental schools similar to the Dalton School are finding official, albeit cautious, support from the Communist government. The balance sought is a delicate one. Creativity in medicinal doses—yes; the possibility of deeper real change—not if it is de-stabilizing. As Ms. Franks describes in her book, the Party sometimes came to the classroom to oversee these educational experiments. One day Party members visited the classroom as her students were discussing Aeschylus’ Oresteia, a book about whether justice should be decided on an individual basis, as ancient Greek heroes did, or whether it was a matter for the State. She recounts:

The Party officials and I nodded at each other. The class continued, although dynamics shifted.

“What the state wants must win,” asserted Jack. I wondered if the presence of the Communist Party members had prompted that statement.

“Tell me why you believe that,” I responded. Then I wondered if my own reaction was a little blunted for the benefit of the silent presence in the room.

“The community is more important,” he responded, seemingly a little ill at ease. “The state must come first.” Did he glance at one of the men? Sara tried a peace-making approach: “The state is advantaged by tranquility, so it should promote cooperation, even if the state has the power to show more strength, to compel.” Suddenly Janie came in, perhaps not liking the atmosphere of caution. She said defiantly, head thrown back, “The state’s justice will be for its own benefit. The state must be challenged by individuals.”

There was no reaction from the still figures outside the circle. After a moment of waiting, I took the class to another place in the text and we read aloud for a while before continuing the discussion on a different point. A few minutes later, the Communist Party officials left the room.

It was impossible to tell what had been in their minds, or whether they even understood English. They might well have been completely unaware of the subject of our conversation, seeing only that Chinese students were speaking up in a second language. Nor could I be at sure that the students had reacted with the self-consciousness that my imagination had supplied. In any case, as far as I know, there was no consequence to the inspection.

Yet I didn’t like the effect it had seemed to have on me or the students—the feeling that we needed to censor ourselves. In one of Grant’s classes about the time of the Communist Party’s inspection, a student turned in a paper proposing that the right way to resolve political questions was “we listen to those in authority, we agree and we obey.” When Grant asked her about that position, she was surprised that he had taken it seriously. “That’s just what you say in papers,” she said. I didn’t like such thinking. For my grandiose hopes of global conversation to come true, people would have to avoid that constraint and speak freely what they feel, think and believe.

The book describes many classroom scenes as Ms. Franks steadfastly and unpretentiously demonstrates a different concept of teaching. Her refusal to provide “the right answer” to the students brought with it some awkward, almost painful silences. Her attempts to pose the right question at the right moment in the right way required discipline and resolve on her part.

Slowly the students responded, then reveled in considering questions such as, “What is the best life?” “Does human suffering have any meaning?” “What is justice and how can it be realized?”

Ms. Franks, through reading and discussing Frankenstein and Flatland with her students, raised in their minds for the first time a distinction between knowledge and wisdom. In our scientific age do we still need wisdom? If we do, then as the Book of Job asks, ‘Where can wisdom be found?’ This discussion is as relevant to classrooms in America as it is to classrooms in China.

Another kind of education takes place in these pages. It is the education of Ms. Franks herself as she confronts her own assumptions and pre-suppositions about books and arguments that she has been familiar with her whole adult life. She sees for the first time, and enables her readers to see, the powerful strangeness of many of our Western texts and habits of mind. She does this by allowing herself to see through the eyes of her students for whom most of these texts have no prior context at all.

During her two years in China Ms. Franks undertook the mirror-image of the task she was asking of her students. She read a number of China’s most widely known and respected classics, visited sites such as the Forbidden City, the Palace of Heaven, the Great Wall, and the Lecture Hall and Grave of Confucius. She absorbed Chinese landscapes and talked to Chinese who had never before even seen a person from the West.

The passages that describe these experiences read like travelogues from a wondrous journey few of us will ever take. Ms. Franks is both drawn towards and often baffled by what she finds in the same way her students are vis-à-vis Western texts. These parts of her book raise it to the level of an important volley in the highly-charged issue of what education might be in a world beyond nationalisms.

Ms. Franks brings her narrative to a close with these words:

“There would be no wrapping up into a neat bundle of certainty—that’s not what the liberal arts are about. Instead, I hoped that in some future I could imagine, these students would carry a memory of our time together and hear, always, all their lives, that it matters what they feel, think, and believe.”To whom does it matter? To all of us. The stakes are high.

A Book About Freedom

Invention: The Art of the Liberal Arts, by J. Scott Lee, is about freedom. It shows with erudition and wit the way that the freedom gained... 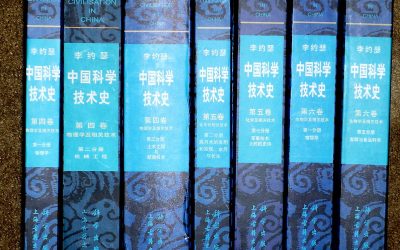 Science and Civilization in China

There are many theories about how to answer Needham’s question. Perhaps it was religion? Governmental structures? Language? One...

Visit Our Bookstore
Like most sites, RespondeoBooks.com use cookies to ensure that we give you the best experience. If you continue to use this site we will assume that you are okay with this.OK